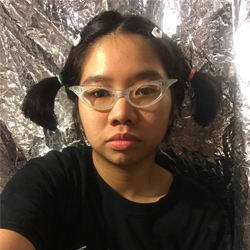 Natasha Tontey is an artist and graphic designer based in Yogyakarta and Jakarta, Indonesia. She is interested in exploring the concept of fiction as a method of speculative thinking. Through her artistic practice, she investigates the idea of how fear, horror, and terror could be manifested in order to control the public. Her works have been shown internationally in Next Wave Festival 2016, Australia, Koganecho Bazaar 2015, Japan, Jejak-Tabi Exchange 2018, Yogyakarta, and Instrument Builder Project: Circulating Echo at Kyoto Art Centre. Her solo exhibition Almanak was held in 2018 at Cemeti Institute for Art and Society, Indonesia. Other than that, she is also been collaborating with Tokyo CultuART by BEAMS after UNKNOWN ASIA Award 2016 and she is runs a clothing brand Satan’s School for Girls.