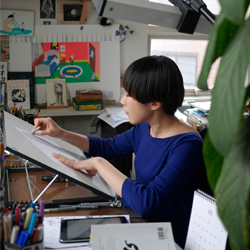 Yeji Yun is an illustrator and artist born in Seoul and worked as a freelancer for several years based in Korea. Since 2006, her work has been published by a variety of magazines and book publishers, Also appeared on t-shirts, packaging, album cover, music festivals and television. As well as doing commissions for a range of clients across the world, she also ﬁnds time to do her own artwork for a exhibition and picture book projects. Her clients includes NIKE, Wieden+Kennedy, Heineken, Laneige, Nobrow press, and Korean Film Council. Now She lives and works between Seoul and London, trying to connect her to the world with images that she is creating.