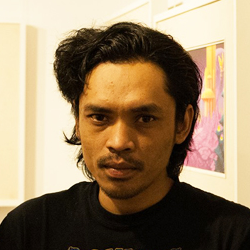 Indonesia based illustrator Riandy Karuniawan migrated to Bandung to study architecture where introduced him to the indie and underground music scene, which he often did illustrations for album covers and band merchandise.
Straddling the dualities of reality and fantasy, Riandy is able to create a porthole into alternative realms and curious landscapes that transport the viewer into a hallucinogenic state of mind. The energies between natural life forms and technology are brought to life as he transcends between alien landscapes veiled in vivid auras crawling with beasts juxtapozed with dream like sci-fi elements. Karuniawan’s preoccupation with unlocking the unconscious mind is reflected in his style.He often features ‘Sathar’ - a protagonist he created with antennae on his forehead and a bong in his hand.